But this is an Act for all my Girls and Women! IT’S A WARRIOR CRY TO RECLAIM OURSELVES in a society that influences us to conform to strict gender roles, ESPECIALLY IN MY HMONG COMMUNITY.  -Cydi

Most Frequently Asked Questions about Me Going Bald

Why did you do it?

I find it hard to explain this to older people or some men sometimes, because it’s so deep. I can’t just come out and say I shaved my head to reclaim myself from society, men, and strict gender expectations (especially in Asian communities) that has been put on women to present themselves in a certain way to be defined as beautiful. But really, that is the gist of it.

I didn’t just wake up one day and decided I was going to shave off my hair. It was a slow process starting from last year. I initially wanted to have a boy cut, but I started seeing how empowered my ladies were cutting their hair that way. I wondered what is something no one dares to do. Ah! Shaving my head! It was on my mind for a few months.

Sanaa Latham as Violet Jones in Nappily Ever After

Women figures like Danai Gurira, who played Okoye, a strong bald female warrior in Black Panther, and Sanaa Latham, who played Violet Jones in Nappily Ever After: a seemingly perfect Advertising Executive, who’s life falls apart and shaves her head. And in doing so, she goes on a self-discovery. These were some women who inspired me to step into the strong woman suit I knew I always possessed, and embark on a self-journey to discover who I really was outside of gender expectations. Who am I really?

And secondly, I wanted to create a new beginning for me. 2019 feels so different and new. I want to be as new as the new year has presented itself to me. This is my year to be my most authentic and best self. No holding back.

Here is a video further explaining why I wanted to shave my head on my Dam* You’re Beautiful Talks series on YouTube.

Here are links to articles of Danai Gurira and Sanna Latham and their feelings after shaving their head.

How did people react?

My mom, well before all of this, I actually asked her first to shave my head. She refused to do it. But, she came and watched.

My dad said, If anyone asks, just say you did it for religion. Say you are Buddha.

Old Hmong grandmas and aunts would gasp and ask why I would cut all my hair off. They also asked if I was turning into a boy.

While I was in the process of shaving my head I said, “Yeah I’ll still look cute!” My six-year-old nephew replied back, “You won’t look cute. You’ll look pretty.”

Many of the women in the late 20s LOVED it! And many of them commented that they considered doing it as well but was never brave enough to do it.

Many young girls gave me heart eyes and encouragement!

Some men talked about how they hoped I donated my hair.

I did not. Every inch my sister cut was like cutting away all my pain and suffering from my body and soul. It felt liberating. For once, I was able to breathe without the expectations of the world tugging on my strands of hair.

Are you going to stay bald or grow your hair?

Honestly I’m not sure. I was actually super nervous the moment before shaving my head. My sister and I even said a prayer. I was scared I was going to regret it, and wondered what if all the naysayers were right. But I followed my instincts and did it. After it, I actually dig the bald head. Why haven’t I gone bald sooner!

So an answer to this is, I think I want to stay bald for a little bit and see how I feel after. 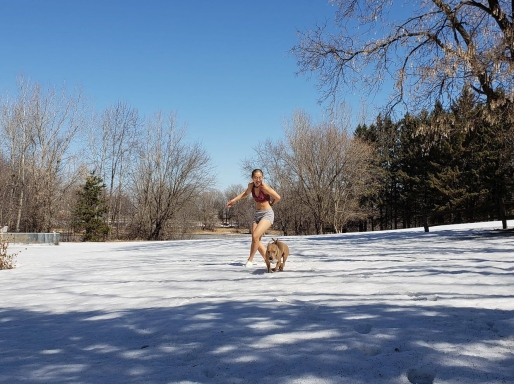 How does it feel?

I definitely feel much more sensitive on my head without all that hair. Taking a shower is like bathing in 20 hands massaging your scalp. Ladies if you thought showers were good before, it’s 100 times better with a shaved head. I feel so much and it’s like for once my scalp can breathe and take in some air. The prickly hair is also something to get used to but every time I brush my hand against it, it again feels like a nice massage.

It definitely feels much more breezy and my head feels much lighter! Just in time for Spring and Summer!

Until we meet again. Peace and Love